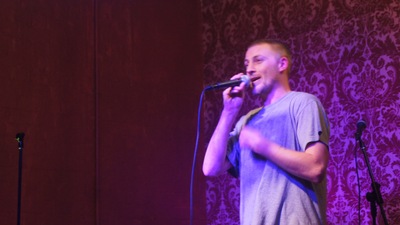 Hare Hole  and Hip Hop is a marriage of like minds.  After the  success of our first two Hip Hop nights, we are dropping the beats back into the books again! Hip Hop at  Hare Hole #3  features  mostly new faces and a couple we have grown to love. We  promise you a fresh show of beats, raps, rhymes, songs, freestyling and spoken word of the highest Hare Hole order.
Line-up includes:

Jacky T is a Melbourne-based spoken word artist, writer and producer. Originally from country Victoria, he wears city life like an itchy woollen sweater. Jacky T is currently on a mission to subvert the mainstream ethos on class and gender issues with uncomfy juxtapositions and humour. He is a regular performer at the Hare Hole.
Jacky T has a 2 FREE instrumental EPs out now ‘Old Stylus ep’ & ‘New Stylus ep’ and a chapbook for sale “Things I see around Brunswick”.

Tom Kwan (aka Emptyness) is a Melbourne-based lyricist who originally hails from Canberra. Since splashing into Melbourne’s live music world in 2011 he has been working his way around the city playing alongside some of the scene’s most talented artists, including Elf Tranzporter (Combat Wombat), Manix, Tumi, MC Julez and Seeka. Tom has rapidly gained the respect of his peers for his freestyle abilities and high-quality live performances. Tom is currently the resident host of Melbourne’s weekly hip-hop open mic night Can I Kick It? at the Horse Bazaar. His style is characterised by silky laidback flows containing elegantly interwoven syllable patterns.  Recently, Tom completed his debut EP, ‘The Rain’, (released Aug 2015). Tom has also recently teamed up with producer Stay Nice (The Allganiks) to form the duo Soul Language. Soul Language is now mid-way through completing an EP (Sep 2015).

Eclectic is a Melbourne-based MC, singer and music producer shaking up a fresh blend of roots and soul-infused Hip Hop.  Inspired by the power of music to connect people and create positive change, Eclectic crafts a skin-tingling harmony of conscious lyrics, sassy hooks and bumping beats.  Eclectic is drawn to the good in everything, and weaves her diverse influences into songs that sneak deftly through gaps in fences, and knock at the door of your heart.

Emerald is a Aotearoa/New Zealand singer/rapper/producer. She recently did a summer tour of NZ music festivals with her solo alternative hip hop set and released a collaborative EP ‘Solar’ with reggae artist Justice Peace. Now based in Melbourne, she is an active member of the hip hop community, running events with the collective ‘Free Flow Co-op’.

Sam Lush is a traveling lyricist from Aotearoa/New Zealand, currently working solo and in collaboration with live hip hop group We are Lush. He came to Melbourne in search of opportunitys, and is a lyricist who makes music from poetry to raps over beats about everything from everyday life to struggles of the everyday man. His work is uplifting and thought provoking and he loves to freestyle. Sam spreads love and inspires through his music, words and performing.