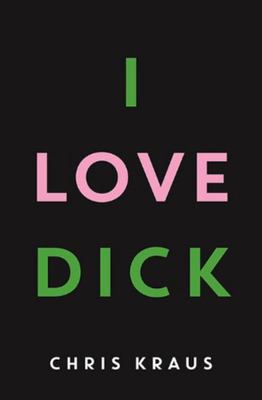 A self-described failed filmmaker falls obsessively in love with her theorist-husband's colleague: a manifesto for a new kind of feminism and the power of first-person narration.In I Love Dick, published in 1997, Chris Kraus, author of Aliens & Anorexia, Torpor, and Video Green, boldly tore away the veil that separates fiction from reality and privacy from self-expression. It's no wonder that I Love Dick instantly elicited violent controversies and attracted a host of passionate admirers. The story is gripping enough: in 1994 a married, failed independent filmmaker, turning forty, falls in love with a well-known theorist and endeavors to seduce him with the help of her husband. But when the theorist refuses to answer her letters, the husband and wife continue the correspondence for each other instead, imagining the fling the wife wishes to have with Dick. What follows is a breathless pursuit that takes the woman across America and away from her husband and far beyond her original infatuation into a discovery of the transformative power of first person narrative. I Love Dick is a manifesto for a new kind of feminist who isn't afraid to burn through her own narcissism in order to assume responsibility for herself and for all the injustice in world and it's a book you won't put down until the author's final, heroic acts of self-revelation and transformation.

The cult novel adored by feminists and fashionistas alike, coming to the UK for the first time - now in paperback

I know there was a time before I read Chris Kraus's I Love Dick (in fact, that time was only five years ago), but it's hard to imagine; some works of art do this to you. They tear down so many assumptions about what the form can handle (in this case, what the form of the novel can handle) that there is no way to re-create your mind before your encounter with them -- Sheila Heti Tart, brazen and funny ... a cautionary tale, I Love Dick raises disturbing but compelling questions about female social behavior, power, control Nation Ever since I read I Love Dick, I have revered it as one of the most explosive, revealing, lacerating and unusual memoirs ever committed to the page ... I Love Dick is never a comfortable read, and it is by turns exasperating, horrifying, and lurid, but it is never less than genuine, and often completely illuminating about the life of the mind. -- Rick Moody For years before I read it, I kept hearing about Chris Kraus's I Love Dick. I mainly heard about it from smart women who liked to talk about their feelings ... I didn't understand exactly what it was, but it had an allure, like whispers about a dance club that only opened under the full moon, or an underground bar you needed a password to get into ... then I read it. I was nearly two decades late to the party - I Love Dick came out in 1997 - but I loved the party anyway. I was finally part of it, and it made me feel even more part of it - part of something ... I was holding white-hot text in my hands -- Leslie Jamison New Yorker I Love Dick is one of the most important books about being a woman ... Friends speak of Kraus's work in the same breathless and conspiratorial way they discuss Elena Ferrante's novels of female friendship set in Naples. The clandestine clubbishness that envelopes women who've read and immersed themselves in the texts shows how little female desire, anger and vulnerability is accurately and confidently explored in literature and culture ... the book reveals far deeper truths than standard and uncomplicated love plots tend to. -- Dawn Foster Independent

Chris Kraus is the author of the novels Aliens and Anorexia, I Love Dick and Summer of Hate as well as Video Green: Los Angeles Art and the Triumph of Nothingness and Where Art Belongs. A Professor of Writing at the European Graduate School, she writes for various magazines and lives in Los Angeles.