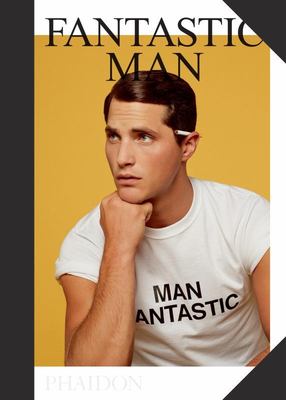 Charismatic, compelling and trendsetting, 69 of the world's most influential and creative men presented by cult style-bible Fantastic Man.

Twice a year for the last 10 years Fantastic Man has chronicled the world's most stylish and influential men through insightful interviews and the lenses of equally stylish and influential photographers. David Beckham, Tom Ford, Ewan McGregor, Helmut Lang and many others have been cast in a new light by a magazine heralded not only for its witty editorial and award winning design but for the iconic photographers (Juergen Teller, Bruce Weber, Wolfgang Tillmans) who have shot for them as well.

Fully illustrated, Fantastic Man represents the best of the magazines's archives, offering a fascinating portrait of contemporary men's style and a unique viewpoint on what defines masculinity in the 21st century.

The publication celebrates the ten-year anniversary of Fantastic Man magazine. Elegant and cool, the book reflects the magazine's signature aesthetics.

"With its minimalist design and art direction from photography greats... it's bound to be a coffee-table staple." -Racked.com "a much-imitated scripture of men's style" -The New York Times "[S]ome of the best fashion editorials and interviews in the magazine's history" -Out.com "Fantastic Man just got even more fantastic [with this] stylish tome." -DailyFrontRow.com "Fantastic Man's greatest hits. ...No album track duds here, oh no. ...sandwiched between its handsomely printed covers such esteemed gentlemen as Tom Ford, Helmut Lang and David Beckham, photographed and discussed by the finest minds in the business. Kind of like a literary/fashion/man sandwich. ...your guide to being a better man. Guaranteed self-improvement. What more could you want? It's fantastisch." -10magazine.com "Fantastic Man['s] bombastic enthusiasm has been quietly upsetting the world of men#39;s publications since their first issue in 2005." -The Cut/Gallery "Gert Jonkers and Jop van Bennekom are the creators of Fantastic Man, one of the most remarkable magazines of this era. It is an avant-garde throwback-a remarkably formal and philosophical men's fashion magazine that positions itself above the commercial fray with a singular tone and elegant design. " -Interview "Among the frighteningly fashionable, Fantastic Man is pretty much a cult. ...Each one an intelligent and successful man like we all want to be" -The Sunday Times "Fantastic Man has a great influence in fashion circles... a handsome book" -The Guardian

Gert Jonkers & Jop van Bennekom (Amsterdam) are the creators and editors of men's menswear and lifestyle magazine Fantastic Man. Jonkers and Van Bennekom met each other in 1997 working on Blvd, a sophisticated Dutch cultural and lifestyle magazine. The pair collaborated on a gay culture magazine, Butt, in 2001, which had immediate impact. The two then turned to Fantastic Man and continued their success withThe Gentlewoman and a magazine for the fashion brand COS.