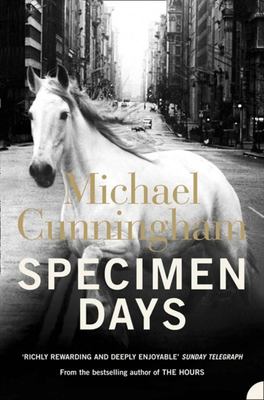 Specimen Days is three linked visionary narratives about the relationship between man and machine. The first narrative, a ghost story set at the height of the Industrial Revolution, tells the story of man-eating machines. An ecstatic boy, barely embodied in the physical world, speaks in the voice of the great visionary poet Walt Whitman. He works at an oppressive factory connected to the making of a mysterious substance with some universal function and on which the world's economy somehow depends. The slight boy can barely operate the massive machine which speaks to him in the voice of his devoured brother. A woman who was to have married the brother is now the object of obsessive interest by the boy. In a city in which all are mastered by the machine, the boy is convinced that the woman must be saved before she too is devoured. This grisly but ultimately transformative story establishes three main characters who will appear, re-incarnated, in the other two sections of this startling modern novel. The boy, the man and the woman are each in search of some sort of transcendence as is made manifest by the recurrence of the words of Whitman ('It avails not, neither distance nor place...I am with you, and know how it is'). In part two, a noir thriller set in the early years of our current century, the city is at threat from maniacal bombers, while the third and last part plays with the sci-fi genre, taking our characters centuries into the future. The man who was devoured by a machine in part one is now literally a machine - a robot who becomes fully human before our eyes. The woman is a refugee from another part of the universe, a warrior in her native land but a servant on this planet. The boy leaves the earth at the novel's close in search of a new-found land. Specimen Days is a genre bending, haunting ode to life itself - a work of surpassing power and beauty by one of the most original and daring writers at work today. First published 2005.

'Intricately conceived, stylishly written and admirably ambitious, this absorbing novel lingers in the mind.' Peter Parker, Sunday Times '"Specimen Days" contains more incidental beauty and emotional insight than many impeccably dull items on the shortlists of prestigious literary prizes. And it's by far the best gothic historical sci-fi cop thriller you'll ever read.' Michel Faber, Guardian 'Cunningham's conclusion is decidedly optimistic, if not utopian!And it is that abiding, dreamlike cinematic sweep of time -- and our place within it -- which makes "Specimen Days" an ultimately satisfying, richly rewarding and deeply enjoyable book.' Philip Hoare, Sunday Telegraph 'Thought-provoking.' Independent 'As a novel of ideas, "Specimen Days" manages to be both entertaining and moving!puzzling, thought-provoking and well worth having.' Daily Telegraph 'Like its namesake, this novel is a work of genius.' The Glasgow Herald 'We live in strange, terrible times. "Specimen Days" catches this strangeness and terror with a poet's eye and a seer's courage.' Irish Times 'One of our very best writers.' Los Angeles Times

Michael Cunningham was raised in Los Angeles and now lives in New York. He is the author of three previous novels including the pulitzer prize winning The Hours. His work has been published in the New Yorker and Best American Short Stories 1989.